Biden to Reveal Outline for Trade Dialogue With Indo-Pacific Nations

U.S. President Joe Biden on Monday will unveil his administration's long-awaited Indo-Pacific Economic Framework, seen as a key step in the U.S. effort to reengage with Asian nations on trade more than five years after withdrawing from a comprehensive trade pact in the region.

Observers can expect to see a statement of broad principles laid out under four distinct pillars: fair and resilient trade; supply chain resiliency; clean energy, decarbonization and infrastructure; and taxation and anti-corruption.

The statement, which Biden will deliver in Japan, is not binding; instead, it's a road map toward cooperation on issues falling under the pillars, all of which will be subject to future negotiations.

Unlike other trade agreements, the Indo-Pacific Economic Framework, or IPEF, is not expected to contain measures to expand market access by doing away with tariffs and other trade restrictions. That omission frustrates many advocates of broader trade.

"Multilateral trade agreements are not seen as being beneficial to American workers," said Sheila A. Smith, a senior fellow for Asia-Pacific studies at the Council on Foreign Relations. "I believe that this is the wrong choice. I think we need to engage more forcefully in trade access and trade talks with our partners in the region. But our politics are not aligned to that at the moment," she told VOA.

Even without the promise of increased market access, administration officials said they expect a significant number of countries to sign on.

“I think you're going to see a really impressive display of energy and enthusiasm by a significant number of countries in the Indo-Pacific for the launch of the Indo-Pacific Economic Framework,” White House national security adviser Jake Sullivan said in response to a question from VOA.

“It is going to be a wide-ranging and comprehensive set of countries from across the region, a mix of different kinds of economies. And that diversity and breadth of participation, in our view, actually vindicates the basic theory behind IPEF, which is — you're right — it is not a traditional free trade agreement. And that's a good thing. It is a modern negotiation designed to deal with modern challenges.”

The Biden administration has come under criticism for taking so long to establish an economic strategy in the Pacific, especially given China's increasing influence in the region.

The unveiling of the IPEF comes more than five years after former President Donald Trump withdrew from the deal that would eventually become the Comprehensive and Progressive Agreement for Trans-Pacific Partnership, an 11-country bloc that now constitutes one of the largest free-trade areas in the world.

Experts see the IPEF as the beginning of a much longer dialogue with nations in the region about how to better align policies and practices.

"This is going to be a standard-setting, norm-creation kind of endeavor," Smith said. "The main goal here is to be inclusive. It doesn't just mean that countries that are more democratically inclined are going to set the rules. It means that finding a common basis of understanding about standards in these new areas of trade is going to be really important."

The Biden administration has said that the IPEF will attempt to "define our shared objectives around trade facilitation, standards for the digital economy and technology, supply chain resiliency, decarbonization and clean energy, infrastructure, worker standards, and other areas of shared interest."

While some experts doubt that much progress can be made in areas such as labor rules and decarbonization without promises of expanded market access, gains are still possible.

"Trade facilitation," the easing of administrative burdens that slow or block the exchange of goods and services, may be among the most promising areas covered by the IPEF, according to Niels Graham, assistant director for the Atlantic Council GeoEconomics Center.

In a paper published by the Atlantic Council, Graham wrote, "For large, developing nations — like Vietnam, Indonesia and Thailand — to see value in signing on to the framework, the U.S. must offer clear benefits that align with their priorities."

"In order to effectively incentivize developing economies' participation in IPEF, the U.S. should place particular focus on the trade facilitation chapters of the framework under the fair and resilient trade pillar," he wrote. "If the United States can facilitate a successful arrangement surrounding the trade facilitation portions of the framework, it will help towards building a broader economic partnership in the region."

"Since market access is off the table for now, I think the real question will be: What are the commercially meaningful outcomes?" Jake Colvin, president of the National Foreign Trade Council, told VOA. "What we'll be looking for is an effort to negotiate a digital trade agreement, as well as supply chain commitments that would facilitate trade and simplify customs procedures."

Regarding digital trade, a major issue will be the role of governments in cross-border data flows. While the U.S. default is to favor free flows of information, other countries are more willing to restrict access.

"IPEF is an opportunity to contrast the path of the United States and like-minded countries from what's going on in places like Russia and China," Colvin said.

Some experts believe that whatever form the IPEF takes, it is going to fall far short of what U.S. trading partners in the Indo-Pacific region really want.

"The Indo-Pacific Economic Framework that the Biden administration is going to roll out is not a replacement for trade agreements," Steve Okun, a Singapore-based senior adviser for McLarty Associates, told VOA. "What the countries of Southeast Asia want [are] trade agreements. They would like to see market access commitments from the United States so that they could get more access to the U.S."

In turn, Okun said, they would offer U.S. companies better access to regional markets and enact numerous policy changes in areas such as labor rules, environmental regulations and other areas of U.S. interest.

However, in the absence of substantive increases in market access, he said, it is difficult to see U.S. trading partners in the region making any meaningful concessions.

"There is, quite frankly, a lot of skepticism right now when it comes to what it is that the Biden administration is going to do," Okun said. "There are some people who are looking this from the glass-half-full perspective, which is: 'They are here. They're engaging. This is a start.' And then there's other people who will look at it from a glass-half-empty perspective, saying, 'Without … trade commitments, what is this really going to mean for us?' "

China has preemptively criticized the IPEF, saying that by trying to create a group of like-minded trading partners, the U.S. is adopting a "Cold War mentality."

"The Asia-Pacific is a promising land for cooperation and development, not a chessboard for geopolitical contest," Chinese Foreign Ministry spokesperson Zhao Lijian said May 12 at a news conference.

The People's Daily, a Chinese Communist Party-controlled newspaper, accused the U.S. of trying to force countries in the region to break away from trade relationships with China.

The paper quoted an expert as warning, "The U.S. is going to use the framework to decouple from China, and will try to lure ASEAN [Association of Southeast Asian Nations] members with the market economy of the IPEF and then force them to choose between China and the U.S." 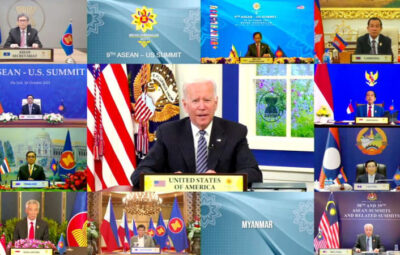